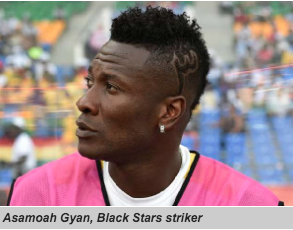 Ghana’s all-time top scorer Asamoah Gyan has taken a subtle dig at some Ghanaians for hunting him with his penalty miss at the 2010 World Cup against Uruguay.

The Black Stars were on the verge of becoming the first African team to reach the semifinals stage at World Cup when Luis Suarez handled Dominic Adiyah’s goal bound header which had crossed the line to deny the Black Stars of their dream qualification in the dying minutes of extra time.

The Uruguayan international was sent off and Ghana was awarded a penalty to redeem glory. Having scored two penalties at the tournament, Gyan stepped up to kick the penalty but infamously missed and that missed penalty has since become the agony of many Ghanaian football fanatics.

The Black Stars eventually lost the penalty kicks after extra-time and were knocked out of the tournament.

Exactly ten years after the incident Ghanaians still habour the pain of July 2 and often blame the striker for his failure to score from the spot.

He tweeted, “We celebrate failure more than achievements. Me di333 I dey my corner dey enjoy myself. My family is very proud me. That’s what matters to me the most.”