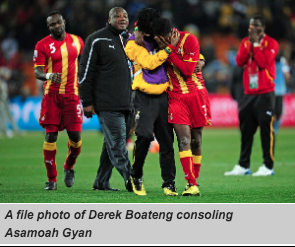 Ghana’s all-time scorer and Africa’s top score at the FIFA World Cup, Asamoah Gyan, has sent a coded message on the remembrance of Black Stars exit from the 2010 world cup.

The Black Stars of Ghana, in 2010, nearly became the first African country to reach the last four of the World Cup which was hosted by South Africa when Asamoah Gyan failed to convert the last-minute penalty kick after Luis Suarez had been shown the exit door for handling a ball which was entering the net.

Thursday, July 2, 2020 marks exactly 10 years that this history would have been made and Ghanaians decided to use the day to remember the painful defeat they suffered at the hands of Uruguay after losing the AFCON trophy to Egypt in that same year.

Reacting to this via his Twitter handle, Asamoah Gyan who often feels unappreciated wrote a coded message on his wall.

“We celebrate failure more than achievements. Me di333 I dey my corner dey enjoy myself. My family is very proud of me. That’s what matters to me the most “