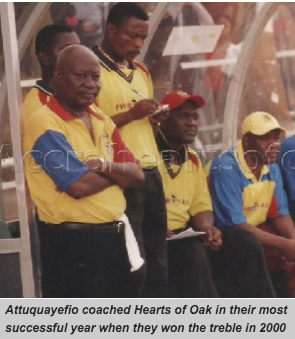 The now retired player labelled the late coach as the best Ghanaian coach ever.

The 37-year-old says Jones Attuquayefio was a man whose words ran deep with every player on his side and made discipline the core attribute every player should have.

Boateng worked under Attuquayefio in 1999 while the team was preparing for the World Youth Championships that year.

The former midfielder could not make the final cut but he says working with the Hearts of Oak coach as a youngster was good for him.

“Every player knows, all my colleagues know that whatever Jones shows us during our time in the team, whenever we go to Europe, we see the same things being done by the white coaches.

Cecil Jones Attuquayefio coached Hearts of Oak in their most successful year when they won the treble in 2000.