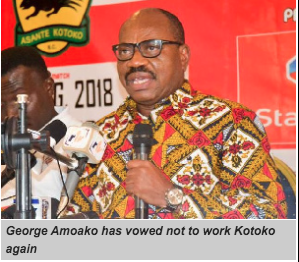 Immediate past Chief Executive Officer (CEO) of Kumasi Asante Kotoko, George Amoako says he will not return to the club to perform any official duty again despite been a fan of the club.

George Amoako, a member of the Ghana Football Association Executive Council recently lost his job as the CEO of the porcupine warriors following the dissolution of the management by the board.

In an interview with Fox FM, he said, “enough is enough” regarding his engagement with the Porcupine Warriors having seen seven different stints at the club.

“Enough is enough now for me with Kotoko. I will not return to the club in any official position even though I’m still a Kotoko faithful.” he said.

He also confirmed the club owes him five months’ salary.

“It is true. Kotoko owes me salaries for five months. But I have not written officially to demand it as speculated by some media.