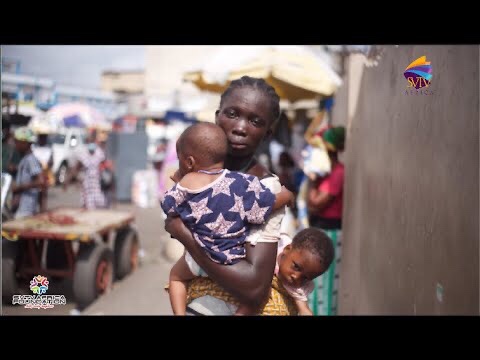 A single mother, who takes care of five children by selling pure water at Makola, has her burden reduced after SVTV Africa Foundation came to her aid.

Abiba Adamu has received 3,300 Cedis after she told her sad story to DJ Nyaami narrating how her boyfriend left her to marry another woman after having 5 children with her.

She also disclosed how she was tagged a witch by her boyfriend’s family so he can have the opportunity to abandon her and the kids, which he eventually did.

Narrating how she takes care of them, she said she went through hell to feed them because she doesn’t make enough money to take care of all the 5 children including herself.

She also told SVTV that her oldest daughter who is 9 years old has stopped schooling, adding that, her third child is with her mother in the village.

Fast forward, SVTV through some good Samaritans have contributed 3,300 Cedis to rent a new room for the single mother.

She has equally thanked those who came to her aid, pledging to stop the pure water business if she should receive better capital to start another business.