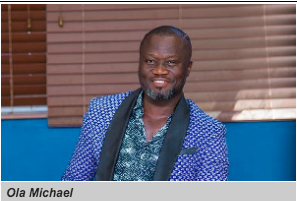 According to Ola Michael, it is insensitive on the part of NAM 1 and his team, to spend money to sign a new artiste when they have not paid the people who invested their monies at Menzgold.

Ola Michael, speaking as a panel member on Peace FM’s ”Entertainment Review” programme, further slammed the management of Zylofon Music saying it’s a wrong timing for them to commence operations especially when Nana Appiah Mensah has failed to reimburse Menzgold customers whose monies are locked up in the gold firm.

He said it was impossible to decouple Zylofone Media and Menzgold as suggested by people, because clearly Zylofon Media was built from the money invested in Menzgold.

Menzgold went underwater when the Securities and Exchange Commission (SEC) asked them not to take any new deposits about two years ago, which has prompted many demonstrations from its customers, who have publicly demanded their monies be paid back to them.

”If someone tells me to separate Zylofon from Menzgold, me, I won’t agree. I feel the whole Zylofon building was erected with money from Menzgold. Because who can tell me that, since Zylofon was started, the whole establishment, music and film, has earned them a profit of GHC 1 million? I think now that they’re reopening it is a bit insensitive to those whose money are locked up at Menzgold. It’s very, very insensitive.

”We will be branded as doomsayers for saying this…I don’t know why the need now and why they want to do it now. I don’t know the plan but I feel it’s a bit insensitive to those whose money is at Menzgold”, he told host Akwasi Aboagye.