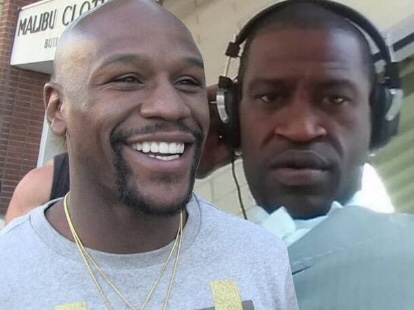 Floyd Mayweather has offered to cover the funeral expenses for George Floyd, the African-American man whose death while in police custody in Minneapolis prompted protests across the United States.

The former five-division world champion’s promotional company, Mayweather Promotions, confirmed on Twitter he had made the offer, and several local media reports have said the family have accepted.

Mayweather Promotions and the boxer’s agency have yet to respond to a request for comment.

The Minneapolis police officer who kneeled on Floyd, Derek Chauvin, has been sacked and charged with third-degree murder and second-degree manslaughter.

Three other officers involved in the arrest have not been charged.

The incident has prompted anger across the United States and abroad, with numerous professional athletes and leagues speaking out, including NBA great Michael Jordan and golf’s 15-times major champion Tiger Woods.

Steve Bisciotti, the owner of the NFL’s Baltimore Ravens, has pledged $1m for social justice reform and said a group of former and current players would decide which organisations benefit.

“There is nothing I can say to ease the pain felt by African-American communities across our country. No words will repair the damage that has been done,” Bisciotti said in a statement.

Like many people, I am sickened, disheartened and shaken by the acts of racism that continue to overwhelm our society.

“The most recent killing, involving George Floyd, is yet another tragic example of the discrimination that African-Americans face each day.

“Now, more than ever, we must all strengthen our pursuit of positive change, as we stand with peaceful protestors around the country.

“We must all seek to understand by listening better and learning more. We must all discover new ways to unite. We must all work to break the cycle of systematic racial injustice.”