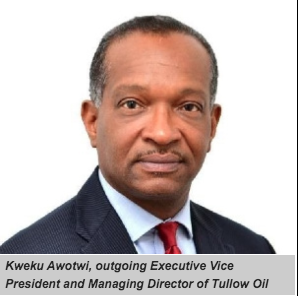 Outgoing Managing Director of Tullow Ghana, Kweku Awotwi, has revealed the reason for his exit three months before the actual date.

Kweku Awotwi, who retires from the company on June 30 instead of September this year, will hand over his responsibilities to Wissam Al Monthiry.

According to Mr Awotwi, he felt the need to have his successor, Wissam Al Monthiry, have a smooth transition into the company.

In an interview with Citi Business news he explained, “The private sector is free to do what it wants in terms of retirement, but Tullow as a company has adopted new public sector standard where 60 is the retirement age and we actually apply it quite religiously. So, I was due to hit my retirement in September. Basically, the reason why I took early retirement was that we have a new CEO coming on July 1, and I didn’t feel that I would be around for two or three months and then leave. So, I thought let me leave before he comes, so that he comes with a clean slate and a clean team, and that’s really the reason.”

Kweku Awotwi, who has worked with the giant company for about two years, added that although his time at the renowned oil company was relatively short, he has made some key inputs.

He is the first Managing Director of Tullow Ghana to be promoted to Executive Vice President of Tullow Oil PLC.

“I think I came in at the time when the industry was quite turbulent, and I was not there for a long time. I was at VRA for almost 5 years, Ashanti Goldfields too I was there for 6 years. Clearly, you can make more of an impact the longer you stay, but in the time that I have been there, I think that I made some good contribution. The current production that you see in 2020 is really a result of work and effort and initiatives and appointments we made in 2019. They are paying off. They are very important for us currently to meet our production guidelines,” he stated.

Citing some of the vital contributions he made at the organization he noted that, “We made a number of other technical projects. We are almost finishing what we call the pipe repair remediation project. We produced 50 million barrels a TEN, and we also laid the foundation for a legislation that allows us to access some areas in our production area that we didn’t have right to. And a lot of these, I had some significant input into. So in my time I feel I made my contribution and I am happy to move out.”