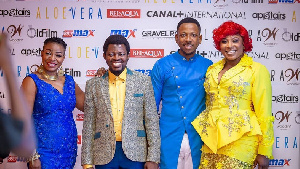 He said the initial budget was exhausted when heavy rain damaged parts of the film set, forcing him to extend the shooting days to 7 to 8 days.

He captioned an interview he granted Forbes8: “Lol. Indeed, I thought #AloeVera film would cost us only USD 150,000 until the rains set in, damaged part of our set and extended the shoot for 7 to 8 extra days and shot our budget beyond USD 200,000.”