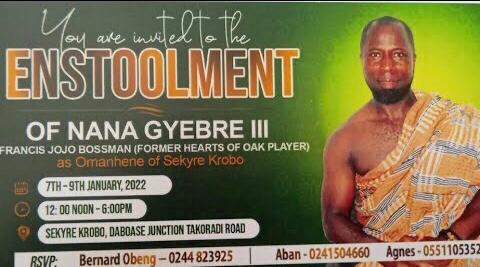 Former Hearts of Oak player, Francis Bossman will be enstooled as a paramount chief in his village on January 7, 2022.

However, his initial decision was to decline the offer. According to him, he went back to Germany where he stays to give it a thought but what he saw pushed him to accept the title.

Speaking on SVTV Africa, Francis said “I can’t say what I saw on TV but I called to accept the chieftaincy title,” he told DJ Nyaami.

Francis will be enstooled as the paramount chief of his hometown, Sekyere Krobo near Daboase in the Western Region.

The ceremony will take place from January 7th to 9th 2022. Bossman has been given the stool name NANA GYEBRE III.

He was a member of the Phobian team which clinched the maiden edition of the CAF Confederation Cup in 2005 against rivals Asante Kotoko.