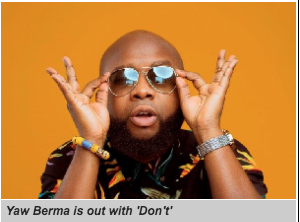 The Tema-based rapper held a premiere on December 6 and released it on YouTube later. Two weeks ago, he dropped the audio version.

The 3minutes-30seconds video was directed by Sam Genesis and production credits out to Methmix.

The video feature rapper Dcryme, endorsing the video. Both versions are out on major platforms.

Check out the official video below;