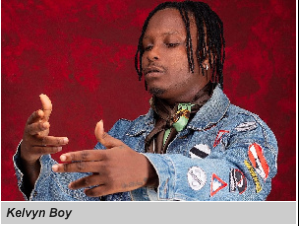 Kelvyn Boy’s life has been threatened in Ashaiman today when he made an appearance at an event.

In a video seen by pulse.com.gh, a macho man stormed the venue where the singer was and he had to run to cover. It is yet to be known what has triggered the attack but some fans believe it is linked with his ‘beef’ with Stonebwoy who claims Ashaiman as the home of his strongest fanbase.

In reaction to the attack some few minutes ago, the “Mea” singer took to social media to throw shots at whom he believes is behind the attack. He wrote “You send people make dem come beat me? Rolling on the floor laughing. You think say Ashaiman be your own?”

In another tweet, he added that “The moment you start fight me norr wey you Loose”. Kelvynboy was on Stonebwoy’s record label until they parted ways, which has seen him throwing subliminal shots to the dancehall act.

See video of what happened below plus his reaction later.