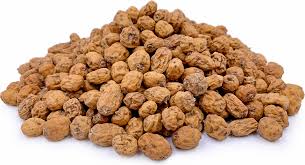 Tiger nuts have been around for centuries and are found in most of the Eastern Hemisphere, including Southern Europe, Africa and Madagascar, as well as the Middle East. Its scientific name is Cyperus esculentus.

In Ghana, however, Tiger nuts are locally called ‘atadwe’ and are mostly consumed by the men. This is because it is widely known in most Ghanaian communities as a ‘sperm booster.’

Speaking to an ‘atadwe’ seller, Rita Kuje confirmed the assertion and added that when juiced, the milk can be given to babies or the nursing mother could also it.

Here are some of the health benefits of tiger nuts;