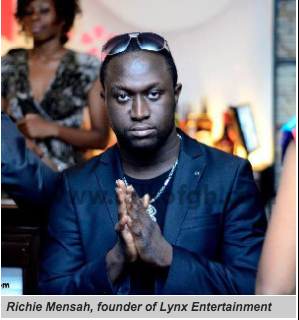 Boss of Lynx Entertainment, Richie Mensah has said former signees of the label may have lost steam because the artistes might have had to handle a number of things by themselves.

According to him, Lynx as a record label has structures and staff that make the operations of the label smooth for artistes to thrive and climb the ladder of success. The inability of artistes who exit the label to gather the needed resources and pursue their careers, he said, could be a hindrance.

Richie, will, however, not accept suggestions that former signees have failed.

“I started Lynx Entertainment in 2003, we have been doing this for 17 years. I don’t think it is fair to say that artists who left Lynx failed,” he said on Showbiz927.

“I think it’s just a matter of fact that when they are not on the label anymore, they lose out of the experience. The Lynx stuff is very big. There are a lot of people under employment so when an artiste is under our label, we have so many things being done for them that they don’t have to worry about. When suddenly they are on their own, they either need to do this by themselves or need enough money to hire staff as Lynx has.”

His comment comes on the back of arguments that the likes of Asem, Zigi, OJ Blaq and Eazzy have faded into oblivion after exiting the label.

Touching on suspicions of a rift between artistes and managers as the only cause of breakups, Richie remarked that it is not always the case.

He continued: “Because celebrities have talkerbility, it just gives us something to talk about. If we would be honest, I have a cousin, last year, he dated three different girls and nobody cared; but everybody cares about Fella Makafui, Medikal and Sister Derby.”