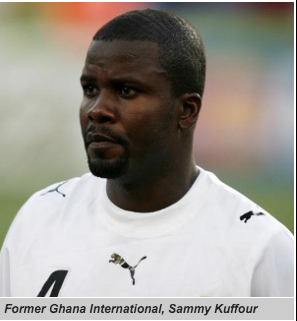 Former Asante Kotoko head trainer, Malik Jabir has defended why he sacked Samuel Osei Kuffour from the camp of the Black Stars during the 2002 Africa Cup on Nations staged in Mali.

Osei Kuffour was sacked from the camp of the Black Stars for an alleged indiscipline act.

The 43-year-old has, however, denied such allegations in his interview with Joy FM insisting he fought for his teammates due to the ill-treatment meted out to the players.

But Malik Jabir insists Samuel Osei Kuffour was a bad influence on his teammates during the tournament and he even engaged in a physical fight with a colleague.

“I was with Ben Koufie, that night and we went round to see if we could get a hotel which was better but it could not accommodate all of us until around 1 a.m,” he told Luv FM.

“We returned to find them still waiting for us. He even exchanged blows with one of the players, I was told.

“Some of them refused to sleep at the hotel. Who was leading them? I know who led them…these boys remained at the centre of this hotel until midnight and they said they won’t sleep because the hotel was a low- class hotel,” he added.

Meanwhile, the ex-Ghana international and Bayern Munich legend has denied such reports.

“They even said I went to the night club which was not true because there was no night club where we were staying,” he said on Joy FM.

“I never regret being bold because I was concerned that some of the players could even catch some serious disease. Black Stars were eating by the roadside, a chop bar and you can ask any player.

“Why did Michael Essien leave the camp and went back? Has anybody asked this question before? The players were not happy with the situation.”