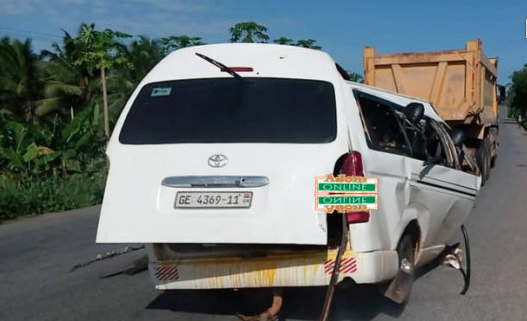 Three persons have been confirmed dead after a Hyundai mini bus they were traveling in crashed into a tipper truck at Anorf, a suburb of the Nsawam Adoagyiri Municipality on Tuesday morning.

The bus attempted to overtake a vehicle ahead of it and in the process, crashed into the truck with registration number GT 992-20 coming from the opposite direction.

The Hyundai with registration number GE 4369 -11 was said to be traveling from Asamankese to Nsawam.

They include six males and five females.

The Nsawam District Police Commander, Superintendent Marian Owusu, who confirmed the incident, said three of the passengers, who are in critical conditions, have been transferred to the Korle-Bu Teaching Hospital in Accra.